How temporary realignment has impacted the NHL standings so far

Just what impact have the new temporary division alignments for the 2020-2021 National Hockey League season have on the standings to this point in the season.

Looking at the National Hockey League standings, the first thing you notice is the Toronto Maple Leafs sitting in pole position. But is it real?

The answer is yes. In my seven years at TSN, that was the easiest piece I’ve written to date!

Now for a more interesting question along those same lines. Some recent discussion has centred on whether the Maple Leafs have merely been reaping the benefits of forced temporary realignment and an apparently weaker division, or are a genuinely improved team that is putting daylight between themselves and other playoff contenders.

One roadblock in answering that question is the fact that the divisions are locked, meaning no interdivisional play this season. Stare at the standings long enough, and you could convince yourself that both answers are correct.

But we can try to quantify what impact the divisional restructuring has had on performance, mostly because the intervening off-season was unlike any other.

Normal off-seasons generally involve significant player movement and organisational changes, so year-to-year changes in performance are anticipated. But this off-season was eerily quiet, in large part due to an unexpectedly flat salary cap. Outside of a couple of teams (the Montreal Canadiens for example) who had the luxury to spend, most were forced to tweak their rosters at the margins and run it back.

It’s also not lost on me that even after 20 or so games, most of the playoff teams from the prior season are in position to become playoff teams once again. Consider the current standings and note the teams occupying the top four slots of each division: 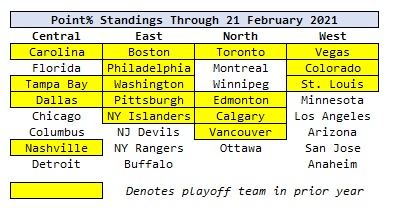 You can find a couple examples of teams on the rise, like the Florida Panthers. You can also spot a team like the Nashville Predators off to slower-than-expected starts. But for the most part, the broader spectrum of playoff-calibre teams hasn’t changed much, and most teams are reasonably in line with their prior year’s expectations. Consequently, the year-over-year correlation in net goals (and, consequently, wins and losses) is quite high.

The one thing we do know is that every single team in the NHL has a dramatically different schedule this season. In order to tease out the relative effect of these scheduling changes, we need to measure this year’s observations against our understanding of team talent level from the end of last season. Let’s create a quick analysis accordingly.

Here, we will do three things:

1. Consider each team’s net-goal advantage/disadvantage from the 2019-20 season (and associated widespread schedule) as a proxy for team talent.

2. Iterate a team’s schedule against what should have been their 2020-21 opponents.

3. Analyse the shifts in performance at a team and divisional level.

Do this exercise across every team in the league, and you can see how a team’s divisional opponents in a normal year have behaved through the environment changes: 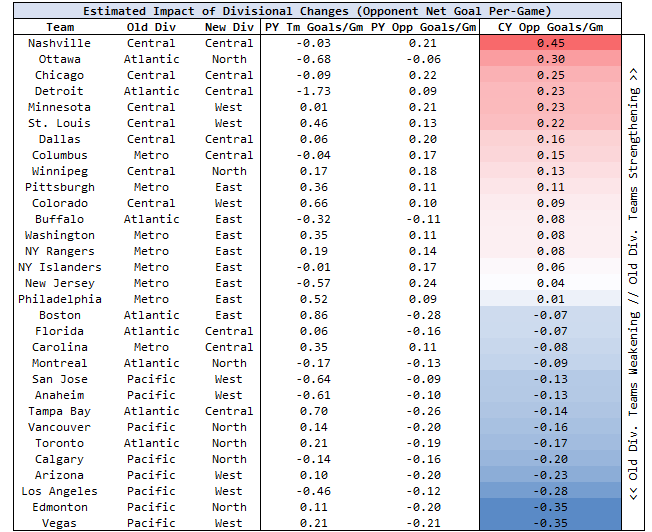 What do these numbers indicate? Let’s look at the Predators for a moment, who have the most extreme example of the 31 teams.

Last season, Nashville – who would have just made the playoff cut in a competitive Central Division – saw an opponent that was +0.21 goals per-game better than a league-average opponent, indicating a reasonably strong division. This season, that number is up to +0.45 goals per game, the highest number in the league. Why is this the case?

The short answer is that their normal divisional foes – some of which stayed in the Central, others of which left for new divisions – have all played rather well in their new groupings.

The opposite of the Nashville situation might be the Vegas Golden Knights, as their normal Pacific opponents have had better years.

The teams that stayed in the Pacific now get to enjoy facing teams like St. Louis and Colorado on a regular basis, and the teams that left – emphasis on Vancouver and Calgary  here – have had relatively rough starts in the North Division. That may suggest the Golden Knights have had a softer division of sorts last season, and a more difficult division to navigate this season.

There is also a funny note about what’s happened with the Central Division. The Central was the strongest division a season ago, and the new Central looks like it will retain that belt. What happened was relatively simple: the division displaced strong playoff-calibre clubs (Colorado, Minnesota, and St. Louis all headed to the West, for example) and received other strong playoff-calibre clubs (Tampa Bay, Columbus, and an improved Florida team) in a clean trade-off.

Let’s bring this back to the Maple Leafs.

Toronto, you will notice, has relatively flat year-over-year numbers – their Atlantic Division foes faring about as well this year as they did last year. Intuitively this makes sense. What was very obvious about the Atlantic Division one season ago is that there were two teams that posed lethally tough matchups, and three teams who were also-rans.

This year, barring something dramatic, Toronto will be a favourite in just about every game going forward. But just as their games against the league’s elite have disappeared, so too have the games against the minnows of the NHL. It puts them in prime position to chase down the North Division title, but it does not put them in a comfortable position of generating game experience against Cup contenders.