Eugene Melnyk (not exactly as shown)

Ottawa Senators owner Eugene Melnyk issued a statement on Friday in response to a pair of Ottawa Sun stories about Melnyk’s involvement with the Sens Foundation and Organ Project charities.

The Sun issued a correction and apology earlier in the day. 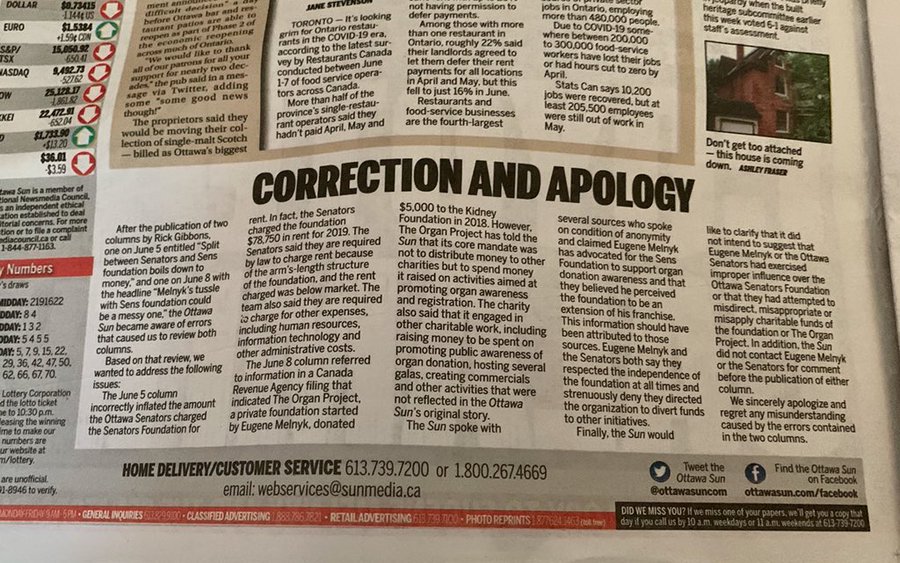 79 people are talking about this

“In his June 5 column, [Rick] Gibbons claimed that Melnyk was exercising improper influence over the Senators Foundation to ‘divert’ charitable dollars raised in Ottawa to his Toronto-based charity for his own benefit. As well, Gibbons wrote that Melnyk views the charitable organisation, which has a licensing agreement with the Ottawa Senators hockey club, ‘as an extension of the business as opposed to a quasi-independent entity with its own mandate and charter.’ This is patently false. Gibbons based this assertion on information provided by anonymous sources and reported it as fact. Although Gibbons apparently sought comments from the Foundation’s management and board, he made no effort to contact the Senators or Melnyk prior to publishing these claims.”

Melnyk also disputed what the Sun wrote about rent charged to the Sens Foundation.

“At the same time, Gibbons declared he was told that Melnyk charges the foundation ‘hundreds of thousands of dollars annually’ in rent, which hinders the foundation’s charitable giving. This assertion is patently false.”

“Furthermore, charging rent to the Foundation was a legal requirement for the Senators in order to maintain the independence of the charity. As an independent entity, the Foundation’s licensing relationship with the Senators is different from other sports charities, which are often owned by the teams.”

Earlier this month the Senators said their agreement with the Foundation was set to expire at the end of July and that the team intended to explore alternative options to further its philanthropic endeavours.

Melnyk’s statement also took issue with the June 8 column report about how much money The Organ Project, a not for profit organisation Melnyk founded in 2016, had invested in organ donor awareness.

The Organ Project. ODG is consumed by this. Along with some yummy sauteed onions