Jason Botterill was given a vote of confidence in late May by Buffalo Sabres president and co-owner Kim Pegula – even though she acknowledged it might not be the most popular choice among the fan base – yet on Tuesday the general manager was relieved of his duties.

“The decision was made after many candid discussions with Jason during a full review of our hockey operations,” Pegula said in a joint statement with her husband Terry. “We recognized we have philosophical differences regarding how best to put ourselves in a position to compete for a Stanley Cup.”

The Sabres have the seventh-best odds at winning the 2020 NHL Draft Lottery, which is scheduled to take place later this month, and regardless of where they end up it’ll be new GM Kevyn Adams making the decisions from here on out as Botterill’s assistant GMs Randy Sexton and Steve Greeley were also let go.

Buffalo went 88-115-30 in three seasons under Botterill’s control and missed the playoffs each year — even with the announced expanded 24-team playoff format this year.

A couple days after Pegula said of Botterill, “He’s our GM. Our plan is to continue with him,” Sabres captain Jack Eichel spoke candidly with reporters and said he was frustrated and “fed up with the losing.” Teammates including Rasmus Dahlin, Rasmus Ristolainen, Jeff Skinner and others all echoed those sentiments.

Botterill was ultimately fired because of a lack of results, not complacency. In fact, since being hired in May of 2017 he was among the more active GMs in the league.

Some of his moves were good, some puzzling, while others clearly didn’t work out in his team’s favour.

With that in mind, here’s a look at Botterill’s most notable transactions as Sabres GM.

Traded Ryan O’Reilly, who had immediate impact in St. Louis

Following a 25-45-12 season in 2017-18 that saw them finish dead last in the NHL, the Sabres were bound to shake up their roster in the off-season. On the first day of free agency, four days after acquiring Matt “Well” Hunwick and Conor Sheary from the Pittsburgh Penguins, Botterill pulled off a far more impactful trade by sending Ryan O’Reilly to the St. Louis Blues. The Sabres got Vladimir Sobotka, Patrik Berglund, Tage Thompson plus first- and second-round draft picks in return. The Blues also paid a $7.5-million bonus O’Reilly was owed so making the move when they did saved the Sabres some cash.

Sobotka’s best days were behind him and he wasn’t very productive, while Berglund left the team for personal reasons after suiting up for only 23 games. Thompson, 22, was a first-round pick in 2016 and remains an intriguing prospect with high upside, however a shoulder injury and subsequent surgery derailed his 2019-20 campaign. The first-round pick was used to select mobile American defenceman Ryan Johnson and the second-rounder helped them acquire a solid defenceman in Colin Miller.

Of course, O’Reilly led the Blues to that franchise’s first Stanley Cup championship in his first season with the team, putting up career-high 77 points and earning both the Selke Trophy and the Conn Smythe Trophy for his efforts.

Evander Kane had just four goals and one assist in his final 21 games with the Sabres and was a pending unrestricted free agent, so it wasn’t a surprise Botterill wanted to get something for him prior to the 2018 trade deadline. Botterill sent Kane to the San Jose Sharks in exchange for a conditional first-round pick, a conditional fourth-round pick and prospect Danny O’Regan.

The first-rounder Buffalo received was later used to acquire Brandon Montour from the Anaheim Ducks. Montour was a solid addition and fits in well on Buffalo’s blue line but he ultimately doesn’t have the same type of impact as a 30-goal scorer like Kane, who signed a seven-year, $49-million contract with San Jose three months after the trade. Only 24 players have scored more total goals in the past two seasons than Kane.

Eichel inked an eight-year, $80-million extension a year before his entry-level deal expired. This was a no-brainer as Eichel is an elite talent and one of the emerging faces of the game. On some nights that $10-million annual price tag looks like a bargain. Eichel has improved year-over-year despite not always being surrounded by consistent supporting talent.

Botterill only gave out two contracts that were longer than three years during his tenure in Buffalo. Eichel’s and the eight-year deal he awarded Jeff Skinner after Skinner’s impressive 2018-19. Botterill traded for Skinner a month after the O’Reilly move and Skinner’s first season made Botterill look smart when the former Hurricanes star posted a career- and team-high 40 goals.

While Eichel’s extension was a safe bet and an easy investment decision, Skinner’s $9-million annual salary cap hit seemingly has the potential to be worrisome if the 28-year-old can’t continue producing at a high level. Through 59 games in 2019-20, Skinner only had 14 goals and nine assists to go with a minus-22 rating.

The one silver lining of an embarrassing 2017-18 season was the Sabres wound up winning the draft lottery. Rasmus Dahlin was the consensus top prospect and Botterill did the right thing by not overthinking it and not trading away the pick. Dahlin had 44 points as a rookie blueliner, finished third in Calder votes and had begun establishing himself as one of the league’s best young defencemen in 2019-20 despite his team’s subpar play.

Besides Dahlin, it’s simply too early to pass judgement on most of the players Botterill and his staff selected in the 2017, 2018 and 2019 drafts. However, players like Dylan Cozens and Casey Mittlestadt have high-end offensive potential and Ukko-Pekka Luukkonen is thought to possibly be a franchise goaltender in the making.

Botterill’s first real significant trade was when he sent Tyler Ennis, Marcus Foligno and a third-round pick (which was used to select Jack McBain) to the Minnesota Wild in exchange for former Sabres captain Jason Pominville, Marco Scandella and a fourth-round pick (Linus Lindstrand Cronholm) in a deal that added nearly $7 million to Buffalo’s cap.

Pominville had back-to-back 16-goal seasons in his second stint with the Sabres but wasn’t re-signed after 2018-19. Scandella was flipped to the Montreal Canadiens in January for a 2020 fourth-rounder. Meanwhile, Foligno has been a quality role player with Minnesota and Ennis went on to have success with the Maple Leafs and Senators and now finds himself in a top-six role on the playoff-bound Oilers.

The high-profile Harvard University star and 2016 Hobey Baker Award winner was coming off three decent seasons with the Rangers averaging just under 17 goals per year, so Botterill sent a third-round pick to New York for Vesey who had one year remaining on his contract. Once in Buffalo, the winger wasn’t as effective, his numbers dipped and now he’s a pending UFA.

The Sabres began the 2019-20 season going 8-1-1 but the team eventually returned to their losing ways and by the turn of the calendar were back to being no better than a .500 team. So that’s why adding veteran rental players like Michael Frolik in January and Wayne Simmonds on trade deadline day were sort of head-scratchers.

They had lost seven of eight when they added Frolik but were still in the hunt and management was making a concerted effort to snap a nine-year playoff drought. Adding Simmonds didn’t help either, as the team lost six in a row after the trade deadline which saw them fall well behind the pack and basically dashed any remote playoff hopes. In theory, the Sabres should’ve been adding youth and shedding expiring contracts (like they did by getting Dominik Kahun from Pittsburgh) but instead these two futile moves cost them money and a pair of draft picks.

Besides perhaps the Eichel contract and drafting Dahlin, hiring Ralph Krueger could be the Botterill move that ends up having the longest-lasting impact on the Sabres.

Botterill hired Hall of Fame defenceman Phil Housley to be the bench boss in 2017, but besides an improbable 10-game winning streak in November of 2018 the Sabres never really clicked under Housley. They finished the 2018-19 season on a 3-13-2 skid and Housley finished with an overall record of 58-84-22 as Buffalo’s coach before being dismissed.

Although the team missed out on the post-season in 2020, Krueger immediately gained the respect of his players and was 30-31-8 in the 69 games they played prior to the coronavirus shutdown in his inaugural season.

“It’s definitely a different environment (under Krueger),” Eichel told ESPN in October. “He does a really good job with the guys in the room. Our opinions really matter to him. When you do that and you incorporate everyone into your decision making, you get a really good response from everyone.”

Rochester Americans head coach Chris Taylor and assistant coaches Gord Dineen and Toby Petersen have been relieved of their duties. Additionally, director of amateur scouting Ryan Jankowski and “a good chunk of amateur staff” have been let go too, Sportsnet’s Elliotte Friedman reports.

The @BuffaloSabres announced today that General Manager Randy Sexton, Head Coach Chris Taylor and Assistant Coaches Gord Dineen and Toby Petersen have all been relieved of their duties. 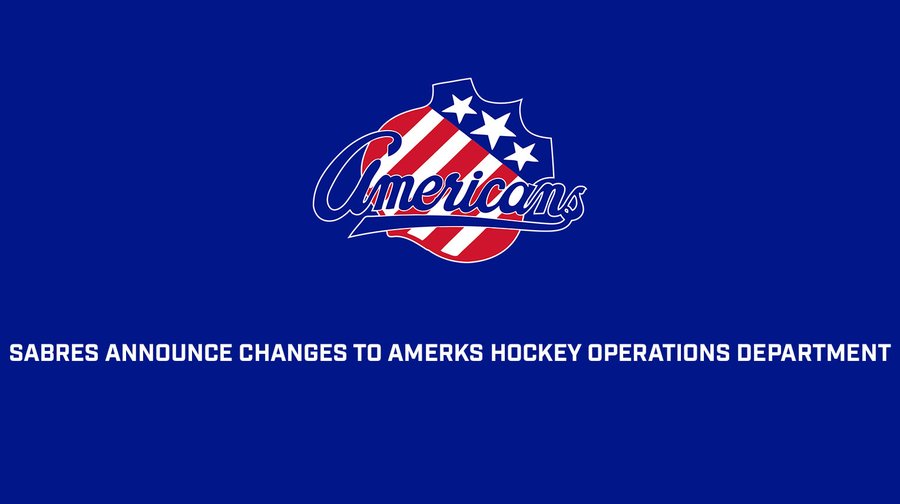 192 people are talking about this

470 people are talking about this

“Our fans deserve better, and we are all tasked with the burden to improve and provide them a consistent, contending team for years to come,” Sabres owners Terry and Kim Pegula said in a statement announcing Botterill’s departure.

Taylor was hired as Americans head coach in June 2017, but had spent 14 seasons earlier in his career with the team as both a player and development coach. The Americans were second in the AHL’s North Division this season with a 33-20-4-5 record before the COVID-19 pandemic shut down the campaign in March.

Jankowski was hired in July 2017 and oversaw two drafts in Buffalo, including in 2018 when the Sabres selected Rasmus Dahlin first overall. Before joining the Sabres, he worked in various roles with Hockey Canada, the Montreal Canadiens and New York Islanders.